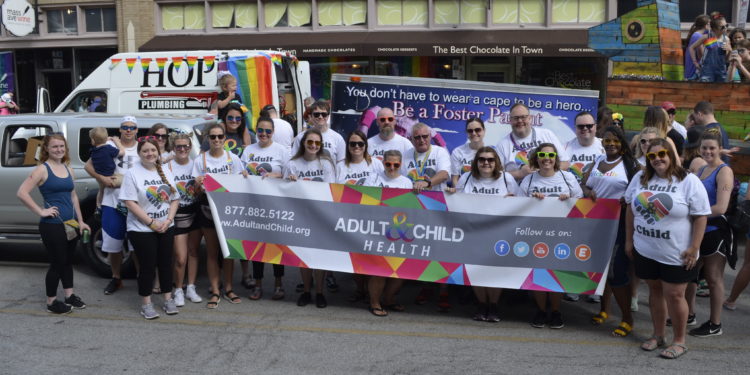 Adult & Child Health was one of several central Indiana organizations that participated in the Indy Pride Festival on June 8. A&C employees, family members, friends and LGBTQ allies marched in the parade. They also attended the festival at Military Park.

A&C’s involvement in the LGBTQ+ community doesn’t stop there, though. The agency has made strides for several years to become a more inclusive organization. It hopes to better serve its LGBTQ+ clients, employees and the community.

RELATED CONTENT: LGBTQ families can become licensed to be foster parents through Adult & Child Health. See 6 reasons why you should consider fostering.

How the LGBTQ Taskforce began

The agency formed an LGBTQ taskforce about four years ago to address the community’s needs, internally and externally. Since then, the taskforce spearheaded efforts to educate all staff on the LGBTQ+ community and its specific struggles and needs. It’s pushed for gender-neutral restrooms. It’s reached out to the community to educate citizens on their health care options. The agency refers LGBTQ+ clients to therapists and others who are well-versed in their unique situations.

Arielle Zerger, a school-based staff therapist, and Nicole Lane-Mullins, a school-based lead clinician, lead the taskforce. It has about 50 members and meets monthly to discuss upcoming initiatives.

“I want to work for an agency that can say they’re LGBTQ-friendly, so I would like to be on the ground working on that stuff and making change,” said Zerger, who has been on the taskforce since its inception. “There is still a lot of ground to cover.” 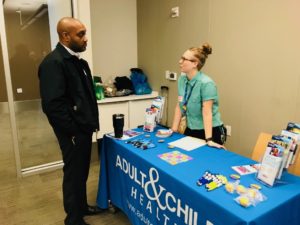 The taskforce has achieved the following moves within the agency:

The Youth Development Team aligns with what the taskforce hopes to achieve agency-wide.

“We can have a bigger impact through this taskforce through the connections within the agency,” Lane-Mullins said. “Seeing that come to life and seeing people across teams reach out has been rewarding.”

What’s next for the taskforce

Now that the Indy Pride Festival is complete, it’s a chance for the taskforce to catch its breath and figure out what’s next. Zerger and Lane-Mullins are proud of what the taskforce has accomplished thus far, but both realize there’s more work to do.

Their agency goals include increased clinical competence surrounding LGBTQ+ issues, and they want to review agency policies to ensure inclusivity.

“We want to be able to say we’re LGBTQ-competent, but there are a lot of people who are much further along in this journey than we are, so we’re trying to partner with them and gain resources from them as best we can,” Zerger said. “I think the rewarding part for me is that we do have great people in the agency who are also passionate about this.” 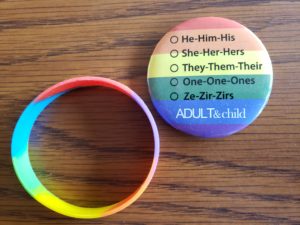 A&C employees who wish to show themselves as LGBTQ-friendly wear the button and bracelet pictured above.

Learn more about our School Based Program, which reaches 3,541 students in 122 central Indiana Schools.

Lane-Mullins emphasized how effective symbolic items could be, such as the rainbow buttons and bracelets that A&C employees wear to display they’re LGBTQ-friendly.

“I recently did my practicum with Valle Vista Health System, and I know going in and wearing my pronoun button made a huge difference,” she said. “There were several youths there who would seek me out as a skills person specifically because of the pronoun button. They would point out the rainbow I was wearing, or make comments alluding to wanting to talk about sexuality or gender identity issues. So, I know our presence and how we present ourselves makes a difference to these youths that we work with.”

Not sure what type of care you need? Our Open Access program can point you in the right direction.